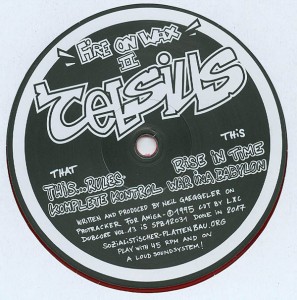 A
This … Rules
Komplete Kontrol

second part of the fire on wax in the dubcore series by Celsius. four more tunes made in 1995 on amgia 500 with protracker. hardcore jungle drops here quickly with stomping breaks and heavy 8bit subbase.

vinyl cut transfer made by lxc of alphacut fame on 45 rpm for maximum pressure!
again a run of 300 copies on red vinyl.